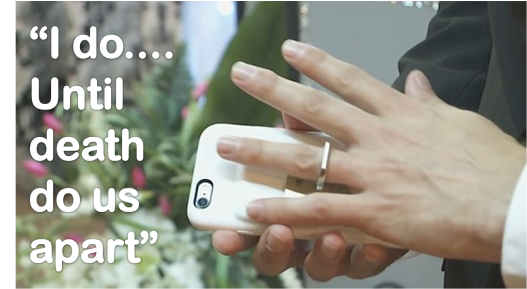 Smart Phone. It’s our new seductive assistant whom we can’t take our hands off. Over the last decade, it has gained characteristics that we once associated with a higher deity – omniscient, omnipresent and omnipotent with an unnatural power over us that we sometimes can’t explain. Recently during my Masters in Psychology, I conducted a qualitative study on the Smart Phone and its relationship with the users. Research shows that phone addiction is associated with alcohol and smoking addictions, depression and even school failures amongst adolescents? It increases anxiety levels and reduces life satisfaction when used excessively. Read on to find out if you are its victim too:

I read a ‘shocking’ study in which participants were asked to stay without their mobile phones (just with their thoughts) in a lab room for 6 to 15 mins or give themselves an electric shock. 43% of participants opted for the electric shock. Bored ka jhatka dheere se lage. Okay so you won’t choose to charge yourself with an electric current, but can you imagine being without your smart phone while standing in a long queue or travelling through traffic or even while sitting in the loo? If you can’t, you my friend are one of the many who gets bored easily and is in search of constant stimulation. Did you know that Machine Learning algorithms can actually predict when you are bored simply on the basis of the typical pattern of your phone use? This data is then used by companies to bombard you with advertisements as you are most likely to engage with their content when you are bored. Truly smart, isn’t it?

In 2013 a new word ‘phubbing’ was added to the dictionary. The word phubbing (‘phone’ and ‘snubbing’) means ignoring a person while paying attention to the phone. Raise your hand if you read updates of people and like or comment on them while ignoring the people in front of you. I hope they don’t have to soon invent a new word ‘phucking’. That may though assist the government’s population control program and even make you a patriot.

Have you ever…. looked at your phone for messages or notifications within a few seconds of just putting it down? used your phone while driving? picked up the phone to see the time and then used it for everything apart from checking the time? If you said yes, allow me to introduce you to the concept of phone addiction. Loss of control of behaviour, having withdrawal symptoms and relapse are signs of addiction. All these can be associated with our smart phone use. And if you think it’s a harmless habit, think about the 1.6 million people that die or are injured every year due to cell phone use while driving.

While the overuse of phones is a big risk, the bigger risk is the over indulgence with fake news on our phones. We Indians are so emotionally gullible that it is easy to manipulate us through rumours and false conspiracy theories. While we can live with the fake news about banks working only 5 days a week, bank’s shutting down, a herb that is a miracle cure for cancer, it is tragic when we believe news created to manufacture hate, spread negativity, create a Hindu-Muslim divide, show superiority over neighbouring countries and even win elections. Yet telling people to not believe Whatsapp news is like playing flute to a cow. It makes no difference to the cow, but you may get lynched for suggesting that the cow is stupid.

So if you are one of those who have said ‘I do’ to the above, wake up and smell the coffee. There are Apps (I use the Space App) that can monitor your phone use and remind you when you are spending excessive time on it. And then, you can go ahead with the rest of the ‘To have and to hold, for better and worse, in sickness and health, until death do us apart’.

P.S. For some of you who prefer the language of science over the cheesy and wannabe humour above, please read my research article…Relationship of Smart Phone with its users

6 thoughts on ““I Phone. Until death do us apart””